In a simple world, you could simulate fluid flow and assume that the walls of the container were at a constant temperature or even adiabatic. In reality, however, there may be significant heat transfer between the fluid and its container, and thus your CFD software must be able to account for this phenomenon. The internal combustion engine is one example of such an application.

The internal combustion engine industry is moving toward simulating the entire system rather than independent components. Conjugate heat transfer (CHT)—the simultaneous prediction of heat transfer in both the fluid and solid portions of the domain—is of critical importance in a full-engine simulation. The accuracy of the predicted combustion in the cylinder is dependent on the temperature boundary conditions in the cylinder. By considering heat transfer in the metal components (e.g., the cylinder head, liner, piston, etc.) in the simulation, the cylinder wall no longer has a user-specified temperature, but instead has temperatures predicted as part of the system simulation. This makes the overall simulation results more predictive by reducing the dependence on boundary conditions. 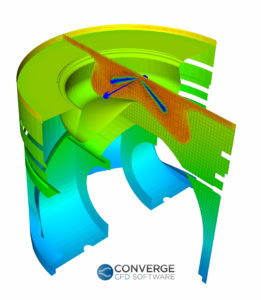 There are several challenges when solving the fluid and solid domains together. The largest challenge to overcome is the difference in time-scales associated with the fluid and solid. In general, the heat transfer in the solid occurs more slowly than the convective and diffusive time-scales dictated by the fluid flow in the cylinder. For example, when you start a car in cold temperatures, combustion occurs almost instantly while the coolant takes minutes (thousands of cycles) to reach a steady-state temperature. This disparity in time-scales is problematic for CFD simulation because each cycle can be computationally expensive.

CONVERGE offers an alternative approach called super-cycling for overcoming the time-scale disparity. In super-cycling, the fluid solver is frozen periodically while the heat transfer in the solid is allowed to progress to steady-state. CONVERGE solves the fluid and solid phases in the same simulation without requiring you to stop and restart the simulation. Super-cycling significantly reduces the computational cost of the CHT simulation.