In-Cylinder simulations run faster than ever before with CONVERGE CFD 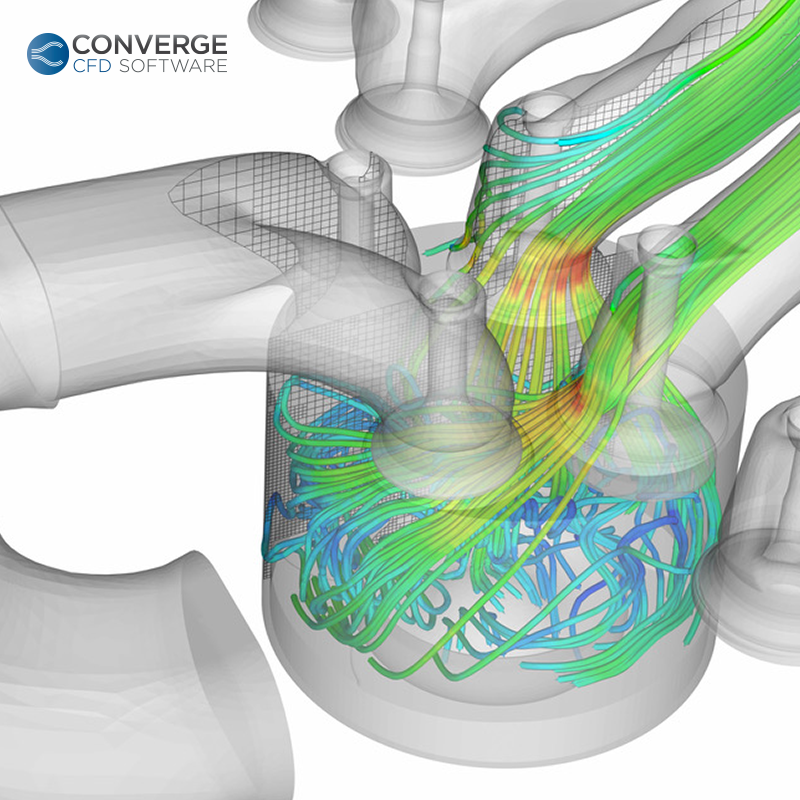 The global automaker Ford has used an innovative combustion modeling tool for the development of its new EcoBlue range of high-efficiency diesel engines. The CONVERGE CFD software package from Convergent Science has been used by the Ford engineers to develop the new 2-liter EcoBlue diesel engines available in the Ford Transit.

“The use of CONVERGE has allowed us to run high quality in-cylinder CFD simulations,” explained Dr. Werner Willems, Ford technical specialist for combustion systems. “We used CONVERGE to refine a number of features on the EcoBlue, including the shape of the combustion chamber, the piston bowl geometry, and the fuel injection parameters.”

In particular, Dr. Willems and his colleagues used CONVERGE CFD during the development of the EcoBlue’s innovative mirror-image intake ports. In a first for Ford, the symmetrical design of the integrated inlet manifold causes the air going to cylinders one and two to swirl clockwise, while the supply to cylinders three and four swirls counterclockwise.

“The two sets of ports are essentially mirror images of each other,” explained Dr. Willems. “When you have a lot of variation between the airflow you’re always focusing on getting the weakest cylinder to work properly, which means the others are being held back. Our mirrored port design improves the distribution of air between the cylinders, which reduces emissions and fuel consumption.”

This contributes to the EcoBlue’s impressive environmental credentials, which include a 13 percent reduction in fuel consumption compared to its predecessor, as well as significant reductions in tailpipe emissions.

CFD studies are a powerful tool in engine development, but they have traditionally been a time-consuming and complex process. CONVERGE, however, reduces the amount of manual input required by automating the meshing process carried out before the simulation.

CONVERGE uses a stationary grid, and it automatically generates the grid at each time-step. That means that events such as valve opening and piston motion can be modeled without stretching or skewing the mesh, which would incur so-called deformation errors. CONVERGE also includes Adaptive Mesh Refinement (AMR), which automatically varies the mesh density across the model. By applying a denser mesh only when and where it’s needed, AMR can dramatically improve the speed-to-accuracy ratio of the simulation.

The Ford engineers are now pressing ahead with development of the EcoBlue range, which will shortly expand to include passenger car variants. Simulation tools such as CONVERGE look set to play a major part in this work, as Ford continues to deliver improved fuel economy and reduced emissions.

Founded in 1997 in Madison, Wisconsin, Convergent Science is a global leader in computational fluid dynamics (CFD) software. Its customers include leading automotive and commercial vehicle manufacturers, tier one suppliers, and professional motorsport teams.
Its flagship product, CONVERGE, includes groundbreaking technology that eliminates the user-defined mesh, fully couples the automated mesh and the solver at runtime, and automatically refines the mesh when and where it is needed. CONVERGE is revolutionizing the CFD industry and shifting the paradigm towards predictive CFD.
Published October 5, 2016