The Engineer Magazine Spotlights the Functionality of CONVERGE 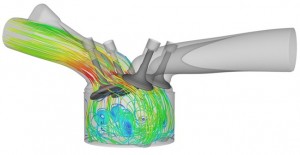 As anticipation builds around the upcoming release of CONVERGE 2.3, Director of Marketing Rob Kaczmarek spoke with UK-based publication The Engineer about how the automated meshing function in CONVERGE actually works. PSA Peugeot Citroën also weighed in on how CONVERGE has improved their workflow. Check out some highlights from Chris Pickering’s article below.

“Some packages have scripted mesh generation, but the second you change one of the parameters that scripting is altered and you get some inaccuracies as a result,” Kaczmarek said. “With our approach, it doesn’t matter how many times the geometry is changed or moved the mesh remains consistent, because it is created during the runtime and rejuvenated with each time step.”

PSA Peugeot Citroën has been using past iterations of the package for more than four years and the group’s manager for the modeling of energetic and combustion systems, Clément DUMAND said this self-meshing capability has substantially improved productivity.

Founded in 1997 in Madison, Wisconsin, Convergent Science is a global leader in computational fluid dynamics (CFD) software. Its customers include leading automotive and commercial vehicle manufacturers, tier one suppliers, and professional motorsport teams.
Its flagship product, CONVERGE, includes groundbreaking technology that eliminates the user-defined mesh, fully couples the automated mesh and the solver at runtime, and automatically refines the mesh when and where it is needed. CONVERGE is revolutionizing the CFD industry and shifting the paradigm towards predictive CFD.
Published September 30, 2015